Australian salmon lead the charge on the beach 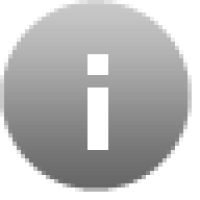 With the colder weather, the annual winter run of salmon kicks off and the last few weeks have been nothing but sensational with most beaches producing some good fish.

I headed off to visit some of the local beaches to find out how the fishing was and was pleasantly surprised seeing so many anglers spread out over a few beaches. Out of all the beaches I did visit, Cape Woolamai was producing some quality salmon from 600g-1.5kg. The anglers that were fishing on that day were using bluebait and fishing the rising tide, which seemed to aid in bringing the fish on the bite.

Kilcunda has also been fishing well and will certainly fire up over the coming weeks. The reports that I have so far received have been of fish ranging 800g-2kg. Bluebait was the most successful bait fished on the rising tide.

I also headed to Williamsons for the first time since they began the desalination project. The access to the beach hasn’t been affected and the fishing is still going strong. There were some nice deep gutters not too far from the end of the track and the one angler that was fishing the beach had five salmon in the 1.2-1.5kg range. Williamsons beach is known for delivering some of the largest salmon throughout the season and so far this year seems to be delivering some good fish already.

The Western Entrance has continued to produce gummy sharks with some fish weighing 15kg. These have been going well approaching a high tide change from Buoy 2 to 8. Anglers fishing these locations have found fresh calamari has been working well along with salmon and trevally fillet.

For the land-based angler, gummy sharks have also been a worthy target on many of the beaches from Point Leo to Balnarring.

Cameron Edwards fished off the sand at Point Leo and managed a gummy on yakka fillet. He found the tide change most productive.

Michael Kilpatrick also fished from the sand at Merricks and managed a snapper that went 6.5kg and was caught on salmon fillet. From Balnarring Beach, Mick reported catching a 4kg gummy shark on a fresh squid as bait.

Fishing from the sand may be challenging for many but for those willing to put in the time and effort will be rewarded for the next few months. Most of the well-known land-based locations such as the ones aforementioned will produce gummies and whiting right up until September.

For those heading to the water edge, fish the rising tide on the lead up to the full moon. Fresh baits are the key with calamari, salmon and silver trevally the prime baits to be offered.

I have to ask myself a simple question, is the whiting season going to end?

I think not; winter whiting are still a popular affair for those willing to go in search.

Kayak anglers have been continuing to catch good numbers of whiting in Coronet Bay. This location provides easy access to the water and the sand holes are only a few hundred metres out. Boat anglers have also found good success in this area with one angler I spoke to showing me a photo of a nice bag of whiting ranging 38-45cm. All fish were caught on pipi and mussel baits.

Nearby to Coronet Bay, Reef Island has been producing some sizeable flathead for those willing to drift in close above the reef. Phillip Dodson managed a nice bag of flathead with one going 65cm while drifting with a paternoster rig over the reef. Amongst the sand flathead have also been a few rockies which have been a nice by-catch.

The Middle Spit, Tankerton and Tortoise Head have all been producing whiting in fair numbers, with many fish being caught along the Middle Spit. Reports are that the fish are all big and fat at this time of year.

Other anglers have also reported the Middle Spit to be fishing very well on the rising tide. Pipi, whiting worm and mussels have been the most productive baits.

At this time of year, anglers thinking of targeting whiting should start to look down along the edges of the Western Entrance as they move closer to the clean ocean water of Bass Strait. Top locations will be Cat Bay and the Flinders area.

Fishing for calamari throughout winter is very productive for those willing to go in search for them.

The Flinders is already producing some good calamari for those drifting the area in boats and kayaks. Size 3.0 and 3.5 sized jigs have been the most productive with Yo-Zuri and IKA jigs catching plenty.

From the Pier the fishing has been a little slow but for those that have caught calamari a baited jig has been the most productive. A high tide is the prime time.

Other areas that have also been producing calamari are the edge of the bank from Hanns Inlet to Sandy Point, Tankerton and the top of the Tortoise Head Bank. While a baited jig will work while under anchor, anglers will find most success while drifting and flicking artificial jigs in the 3.0 and 3.5 sizes.

With the surf season well underway, spinning the surf rather than bait fishing will and can be much more rewarding. To be successful, anglers should arm themselves with a specific surf spin rod similar to that of the Shimano Nexave 9ft Shore spin with suitable 4000 series reel. This should be loaded with 12lb braid and one metre length of 15lb Nitlon fluorocarbon leader.

While there are myriad metal lures on the market, locally the Arma Twist and Anchovy lures have been working well when upgraded with a single lure hook. Walking the beach casting into the gutters has been the most successful technique with anglers putting in 50 or so casts before moving to the next gutter. This allows good coverage of the beach and allows anglers to find the fish rather than waiting for them to come to you.

The Western Entrance has been producing some good gummies of late. 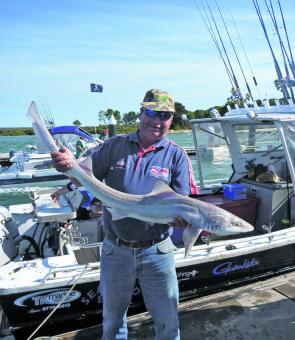 When the salmon are running at Williamsons it can be standing room only. 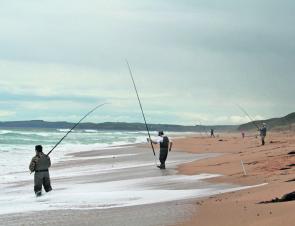 Cape Woolamai is producing some good salmon so far this season. 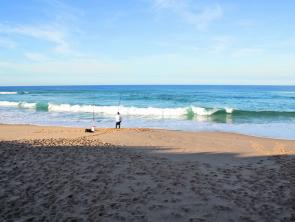 Though there are plenty of whiting on offer, there are some big ones. 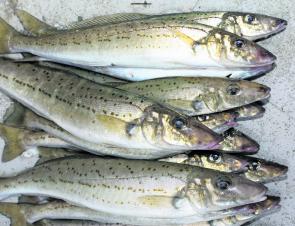